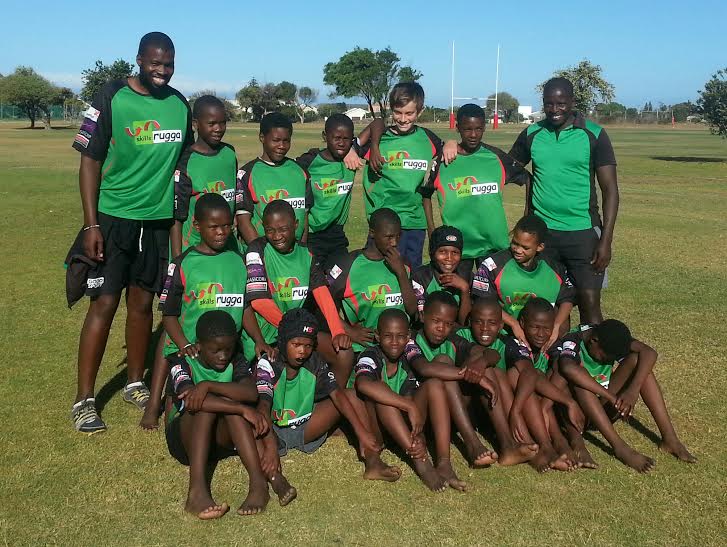 Another one of our great teams… Skills Rugga!

The background of this up and coming team began in September of 2013. Skills Rugga is a Friday afternoon summer rugby training programme based in the south peninsula.  A programme aiming to reach and cater for children in the primary school age groups. This organization is a nonprofit organization.

The dream seed was planted when one of the founders of Skills Rugga,  met the man coaching one of his sons at the local school in Masiphumelele.  He was so inspired and moved by the passion and enthusiasm which the coach so effortlessly displayed..  In his words ” I believe his talent should not be wasted, and felt that he could inspire many more kids, given the opportunity” and so the dream began its manifestation. Together, the three founders began developing the concept of Skills Rugga with vision and passion to achieve goals. 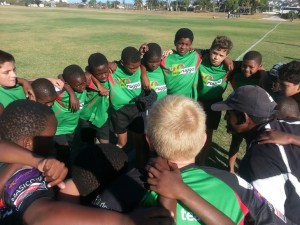 Looking at their goals… Starting would be to raise the level of all the players in the area, by focusing on and developing skill levels during the traditional off-season.  Then moving with strength into the assisting the obvious talent available, within previously disadvantaged communities,  realize its potential,  through access to decent fields and organized training, and lastly to create a slick and professionally organized programme that would attract great interest.  Raising the profile of rugby,  in the south peninsula,  to a level experienced by traditional rugby strongholds in other areas of the Western Cape.

The team at present, with the dream still growing, consists of 3 coaches.  The principle coach being  Sandile India,  along with Teddy Nyali and Russell Speelman in support to the team and principle coach. Lastly the organizer… Vincent Green, a rugby fanatic who is a madly patriotic South African since childhood. Vincent Green is also very passionate about the kids development through sport ( and rugby in particular)… 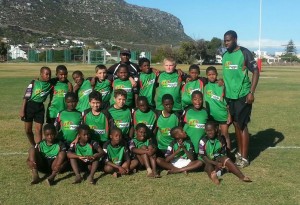 We here at Stud Rugby have had the pleasure of working with this great team, working together to reach goals, creating an awesome look for the teams. We are proud to say that the kids are flying in there new gear and saw victory in both matches played last Friday.  The u/10 team beat a very strong Fish Hoek Primary School team,  3 tries to one, with  the u/13 team competing in a strong game with  Fish Hoek Primary School. All in all another success all round, with great Team Kit produced by Stud Rugby, to support some great players .

In conclusion, Skills Rugga is a non-profit organization. We at Stud Rugby wish to support Skills Rugga, their teams and vision further in their dream. If you are interested in being a part of supporting this Organization, kindly read below for a word from the Organizers.

A note from Vincent Green:

As you will note above, our primary objective is to assist with the development of children from previously disadvantaged communities…and herein lies the major challenge of Transport. The goal is to have a minimum of 40 players (equating to 4 squads ) from Masiphumelele and Ocean View. This is proving to be a near impossible task with the 2 saloon vehicles available,  between the three of us. Another challenge is a question of food / nutrition….We feel it is important to be able to provide food and drink to these kids on the day of the league.

The final challenge is in the form of kit for the players, as we are in the process of arranging warm up matches during the programme.

Any assistance of help towards overcoming these challenges would be most appreciated.