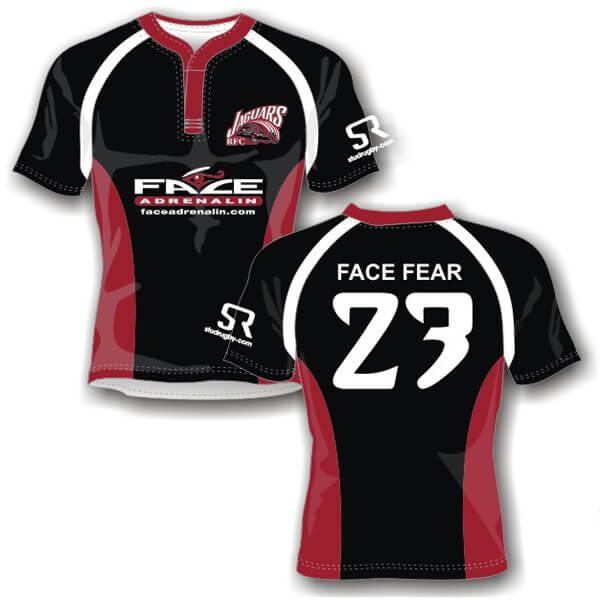 This custom rugby jersey is another option of a jersey design that can either be sublimated or made up as a panel rugby jersey depending on the team or club’s budget. If your team is on a tight budget an idea to incorporate another colour into the rugby jersey would be to introduce ‘flossing’. Flossing is basically the overlaying stitching that we sew over the line of the panel to create a different effect.

If your team has a main sponsor wanting to get exposure from your team’s performance then it’s best to sublimate this particular design. The sponsors love it as it’s a simple design yet effective as the plain background really showcase the sponsors logo. In this rugby jersey example, Face Adrenalin is the headline sponsor.

Face Adrenalin is a company that run the ‘highest bungee from a bridge’ in the world and they sponsor the local rugby club known as the Jaguar’s.
The Bloukrans Bungy uses pendulum bungee technology to ensure the smoothest, most comfortable bungee jump possible.

Like Face Adrenalin, if you are a potential sponsor wanting to get involved in your local community – complete our Get a Quote form with your specific needs and one of our sales reps will be in touch with a quote within 48 working hours.