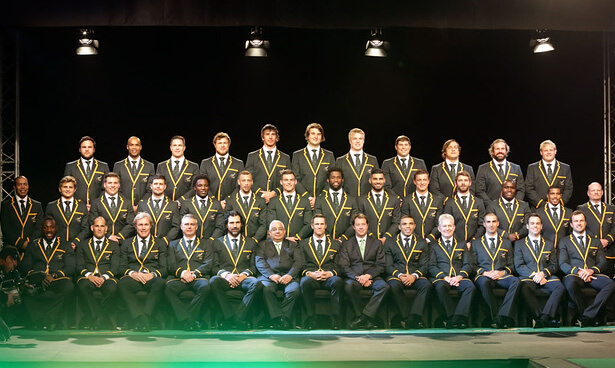 Lets get ready for roaring our Swing Lows, hakas, bone-jarring hits, and glorious tries…. Yes, the 2015 Rugby World Cup is upon us!

Four years ago New Zealand lifted the Webb Ellis trophy in Auckland. This great team banishing the demons of World Cups gone by, lifting the famous cup for the first time since 1987. It was 1987 that marked the first ever Rugby World Cup. This year England will once again be hosting this great event, with the final being held in Twickenham for the first time since 1991. The 2015 World Cup holds promise to be a spectacular event, laced with unpredictability. The world cup will be taking place from 18 September – 31 October 2015. The tournament will be hosted through 11 cities across the UK. These include London, Cardiff, Newcastle, Birmingham and Leeds.

From the South African side, De Villiers will captain the Springboks at the global rugby world cup. At this point it looks as though Matfield would be vice-captain, with Schalk Burger providing back up to the captain of our great team.

This year marks the fourth world cup tournament for both Matfield and Burger. Some of the other players on our team such as De Villiers, Habana, JP Pietersen, Ruan Pienaar, Fourie du Preez, Bismarck and Jannie du Plessis will play in their third world cup. I think the squad has a great balance between youth and experience while keeping together the core of the team that did the country proud in the last few years. We also have a number of players who know what it takes to win a World Cup and their knowledge will be very valuable. With such a fantastic lineup of players we are guaranteed thrilling matches that will keep us on the edge of our seats.